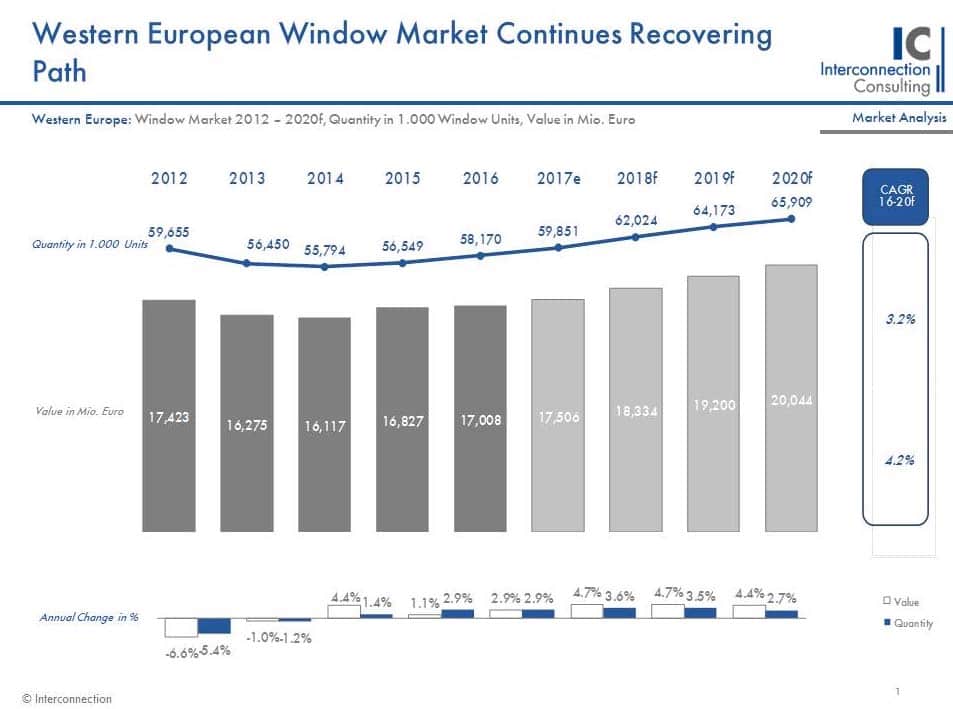 The mixing machines are hot again in Europe and thus are also boosting the window market. The window market in Western Europe increased its sales by 2.9% to 59.8 million window units sold due to the increase in new construction activity last year. By 2020, a moderate increase (+ 3.2% per year, + 4.2% in value per year) is expected for the industry, as Interconnection Consulting shows in a new study.

Sales in all regions of Western Europe are increasing. Growth in Germany, Austria and Switzerland was strongest at 4.0%. According to Interconnection, this German-speaking region (4.5% / year) along with the Nordic countries (+ 3.8% / year), which show the greatest growth, should also reach the forecast horizon by 2020. In the DACH region (Germany, Austria, Switzerland) the number one market driver is the housing shortage in the conurbations. The rising immigration intensifies the pressure on housing construction. The government reacts, especially in Germany, to special depreciation on the promotion of housing. For example, a look at the completion of construction shows a clear recovery in German residential construction (2016 + 13.1%).

Brexit Is Showing its Teeth

The window market in other regions also shows positive development. The Nordic countries (Sweden, Norway, Denmark, and Finland) were able to increase their sales by 3.1% in 2016. In France and the Benelux countries, sales in 2016 rose by 2.6% and in Great Britain and Ireland by 2.5%. However, sales in Great Britain did not increase due to the decline of the pound. And for this year, sales in this region have also been stagnating for the first time for a long time. The region with the lowest sales growth was the south of Europe (Italy, Spain, and Portugal) with a growth of 1.5%. This result is all the more remarkable because it is the first increase in the sector since the start of the debt crisis.

New Construction Is the Market Driver

As far as residential construction is concerned, the new construction sector is the market driver, however, the renovation segment still dominates all five submarkets examined. In Southern Europe, renovations account for 72.5% of the total market. In Northern Europe, 63.7%, the UK & Ireland 63.2%, France & Benelux 61.9% and the DACH region 52.9%. The construction of buildings, on the other hand, is only gradually under way. Due to steady market uncertainties and debt, its growth is smaller than that of the residential sector.

4 of 10 windows are made of plastic (42.8%). The main profiteers of growth in residential construction are manufacturers of plastic windows. “Housing projects are often price-driven, which is why cost-effective PVC windows are used,” explains Laszlo Barla, author of the study. Residential building projects in conurbations are price-driven, which is why providers from Eastern Europe are usually awarded the contract. PVC will be therefore gaining market shares over the next few years. Metal (25.8%), on the other hand, is slightly declining as the non-residential construction is slow. Combinations are the biggest winners. Wood-aluminum is highly valued in Scandinavia, but design plays a major role in Southern Europe.

close
close
Start typing to see posts you are looking for.
We use cookies to improve your experience on our website. By browsing this website, you agree to our use of cookies.
More info Accept